It’s Saturday and C-shift is back on duty. Today has been another “one of those days”. It started out with the station EMPTY. I transfered to #13, Eugene went to #14 and was then redirected to #5, Coon then went to #14, Pee-wee had class, Joe banged out sick and Opie has the cycle off. So, station #3, Engine and Medic sat idle.

Engine 9 was out also as well as several other units. Needless to say, we were running at the bare minimal today. As for me, Lucky 13 wasn’t so bad. Their Lt “Georgie” Perdue was out sick but that left me with “Boots” and a new Rookie, Kyle Inman. Here’s a shot from the front of the bay door and another of Boots fixin up a little grub… Of course the reason I was there in the first place??? Capt. Clayton was off to Swift water training today…AGAIN!! How many days does it take to learn how to put on a pair of water wings? Hell, I’ll loan em my set if they’d just ask. I have the snorkel and mask too. Showed em off a little while back while on a field trip with our Women’s Auxiliary to Emerald Point NC. Clayton and the guys get WAY too excited about this SWR stuff. Fancy little suits and helmets. Jet boats and even a gun that shoots rope. Hell, they don’t even own a snow mobile or a set of crampons. What are they gonna do this winter when all the water freezes? Huh? Never thought of that did they? Guess I’ll have to take the “bull by the horns” and form an Ice Rescue Team. Heck, somebody’s gonna have to be there to bail out all the little Scuba Steves this winter. “Scuba Steve”…LMAO.
[youtube=http://www.youtube.com/watch?v=ezem3I7nfqM]Of course, I think all this swift water / Scuba Steve stuff is just a cheap ploy to sell merchandise and pick up girls.. 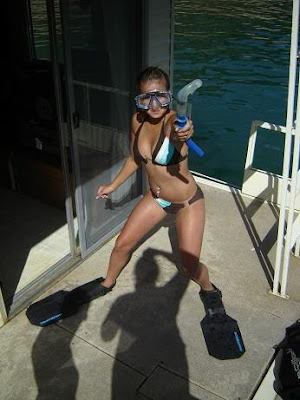 OK, OK, enough picking on the tadpoles. We also had a Heavy Vehicle Extrication class going on today..That’s where Pee-Wee was off to.

I attended one of those classes several years back down in NC so I know he’ll get a ton of good info out of it. So, moving on with the day, We finally got the Engine back in service about 16:00 this evening. Just in time to make one run and blow a radiator hose. YEA! Out of service some more. Eugene jacked her up, we got the hose off and I went down to the local auto parts store and bought a replacement. No easy task plus an altercation at the parts store…

The altercation? I took the medic truck to the parts store…and I’m in uniform. I was approached by a concerned citizen who proceeded to tell me how he wished he had a job where he could ride around and “shop” on the City’s dime. Then he figured it was “his dime” because he pays my salary and “I work for him”. Yea. I’m hot, tired, covered in grease and anti-freeze. NOT THE DAY to be drunk at the auto parts store. So, I then explained to him that the Medic was actually out of service because he wasn’t putting up enough “dimes” to have us at full staffing. I further explained that I was shopping to by parts to fix “his” firetruck with money out of MY POCKET…AND that me and the boys were repairing / replacing the part because again he isn’t putting out enough “dimes” to keep a mechanic on duty to do
these types of things. I then invited him to come on up to the house and give my job a try. I’d bet my left errrrr well I’d bet a lot that he wouldn’t last a day and I know I can handle his. I haven’t had much practice opening checks from the mail or licking food stamps but I KNOW I can sit around all day and drink beer…. that I have practiced. Anyway, I got my 2 cents in and trumped his “dime” remaining calm and professional throughout. Oh but if I wasn’t in that Medic unit or in uniform. Ok, that’s enough for tonight…another long one I know but hey…what else you got to do? Oh yea.. one more quick pic. Our “substitute’ defence coach Big Brad Harris is sucking up the OT here tonight since Joe is out sick. Here’s Big Brad

Alright, we’re back on Monday… see ya then. Stay safe and in house.
Captain Wines.